If you wish to support Lhamo Tso's visit and help her continue to campaign for the release of her husband, please make a tax-deductible donation here. Click on Donate General Contribution and under Special Instructions write "Lhamo Tso Fund". 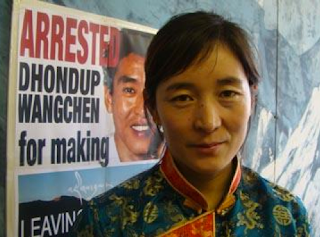 (San Francisco)  At a time when self-immolations are happening with increasing frequency in Tibet, another form of personal protest action is taking place in the US. A Tibetan woman Lhamo Tso arrives in San Francisco next week to begin a 3 week tour of California organized by the Bay Area-based Committee of 100 for Tibet. She is here to build awareness of the case of her husband, filmmaker Dhondup Wangchen, currently serving 6 years in Xichuan Labour Camp in China, and to campaign for his release.

Dhondup Wangchen was detained shortly after completing filming for a documentary called “Leaving Fear Behind”. His film portraying the actual living conditions in occupied Tibet and featuring interviews with Tibetans talking about the situation in Tibet, was shot secretly and smuggled out of the country in March, 2008 just days before mass demonstrations erupted around the anniversary of the Tibetan National Uprising Day. In Dhondup Wangchen’s own words: “At a time of great difficulty and a feeling of helplessness, [the idea of our film is to] get some meaningful response and results. It is very difficult [for Tibetans] to go to Beijing and speak out there. So that is why we decided to show the real feelings of Tibetans inside Tibet through this film.”

On 28 December 2009, Dhondup Wangchen was sentenced to six year's imprisonment for "subversion", following a secret trial in Xining. His family believes he has been tortured while imprisoned, and that he has contracted Hepatitis B and his health is failing. His wife, Lhamo Tso, is living under hard conditions since she escaped to India and has had to support not only her four children, but also the parents of her husband. This is her first visit to the US.


Watch the complete 25-minute documentary "Leaving Fear Behind" on YouTube here. Read more about the making of the film here and sign a petition to Chinese President Hu Jintao calling for the release of Dhondup Wangchen here.


The Committee of 100 for Tibet – an organization dedicated to advancing the Tibetan people's right to self-determination – believes the case of Dhondup Wangchen highlights the urgent need for basic human rights and democratic freedoms in Tibet. The Committee of 100 for Tibet chairman, Tenzin N Tethong, has called on the Chinese government to release Dhondup Wangchen immediately, if only on humanitarian grounds.


A series of public speaking events is being held in the Bay Area for Lhamo Tso at which her husband's film “Leaving Fear Behind” will be shown.


Other events are being organized in San Diego and Los Angeles. For more information visit the Committee of 100 for Tibet's website at www.c100tibet.org.